Annika (rhymes with Monica) Rose is an English major at the University of Illinois. Anxious in social situations where she finds most people’s behavior confusing, she’d rather be surrounded by the order and discipline of books or the quiet solitude of playing chess.

Jonathan Hoffman joined the chess club and lost his first game—and his heart—to the shy and awkward, yet brilliant and beautiful Annika. He admires her ability to be true to herself, quirks and all, and accepts the challenges involved in pursuing a relationship with her. Jonathan and Annika bring out the best in each other, finding the confidence and courage within themselves to plan a future together. What follows is a tumultuous yet tender love affair that withstands everything except the unforeseen tragedy that forces them apart, shattering their connection and leaving them to navigate their lives alone.

Now, a decade later, fate reunites Annika and Jonathan in Chicago. She’s living the life she wanted as a librarian. He’s a Wall Street whiz, recovering from a divorce and seeking a fresh start. The attraction and strong feelings they once shared are instantly rekindled, but until they confront the fears and anxieties that drove them apart, their second chance will end before it truly begins.

My Thoughts: The Girl He Used to Know takes the reader back and forth in time, between 2001, when Annika and Jonathan serendipitously reconnected, to 1991 when they were in college.

Annika’s social anxiety and other issues seemed to trigger the protective, nurturing aspects in Jonathan. But were they destined to fail back then? Can they sort through the issues and do better this time?

As Annika and Jonathan alternately tell their story, we learn more about them and the events that separated them in the past. Moving forward, with the help of a therapist for Annika, we come to understand her struggles and how she has worked to overcome them, and how the two of them have grown and changed.

August 2001 was a significant time period for them to reconnect, as something traumatic loomed on the horizon for them that would require all of their strength to overcome. An emotional ending kept me turning pages as I could not help but root for the two of them. 4.5 stars.

Twenty-one years after they were driven apart by circumstances beyond their control, two former lovers have a chance encounter on a Manhattan street. What follows is a tense, suspenseful exploration of the many facets of enduring love. Told from altering points of view through time, If I Forget You tells the story of Henry Gold, a poet whose rise from poverty embodies the American dream, and Margot Fuller, the daughter of a prominent, wealthy family, and their unlikely, star-crossed love affair, complete with the secrets they carry when they find each other for the second time.

My Thoughts: The alternating stories of Henry and Margot flipped between the present, with their chance encounter in 2012, to 1991, when the two of them fell in love.

They came from different worlds, and I love this kind of story. So much divided them that the chance of them meeting and connecting at all seems unlikely. And then the serendipitous meeting on the street is another moment in time that could have been fate.

How they were shockingly separated one summer night left indelible marks upon them. One might have expected that one of them would search for the other, their lost love. But each had their own reasons why they couldn’t do that.

Until that day in 2012 when they met on the street. And the pull of their intense connection stirred up feelings that had never left them.

They each have secrets to share, secrets that could bring another rift into their relationship. How will they move beyond the divide? What will ultimately bring them together again?

An engaging story that I could not put down. 5 stars. 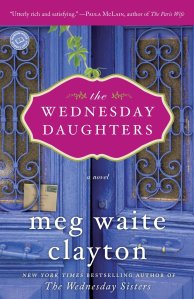 Three of the daughters—Hope, Julie, and Anna Page—are on a journey to learn more about Hope’s deceased mother, Allison Tantry, by visiting the writing cottage where she worked on her unpublished biography of Beatrix Potter.

Set in England’s Lake District, the reader is offered a view of what that place looked like, from the cottages and the surrounding waters to the various pubs and restaurants.

What the women discover first are some journals, some of which are written in code. And while they try to decipher these, we are also shown some backstory: for the mothers and the daughters since we saw them last as little girls and young women in the first book. The daughters, like sisters, have their rivalries. And, like siblings, some of those old issues remain.

Unlike the friendships of their mothers in the first book, the daughters were thrown together by their mother’s choices. They all varied in ages, much more like siblings than chosen friends. And while they maintained lifelong relationships with one another, I didn’t sense the same kind of bond between them that I saw with their mothers.

Can they put the old animosities behind them? Will they finally make peace with their own mothers’ choices? What will they take away with them after the journey? Their mothers’ expectations were a guiding theme as the women reconnected with one another.

The alternating chapters with Allison Tantry’s journals were like a conversation between Allison and Beatrix Potter, almost as if she were channeling her. The daughters decided that she was trying to inhabit Bea in order to accurately write about her.

An engaging story that earned 4.5 stars. Recommended for those who enjoy stories of family bonds and friendships.