At Windemere School for Girls, one of America’s elite private schools, Dr. Gregory Copeland is the beloved chair of the English Department. A married father with a penchant for romantic poetry—and impressionable teenage girls—he operates in plain sight for years, until one of his former students goes public with allegations of inappropriate conduct. With the help of an investigative journalist, and two additional Windemere alumnae who had relationships with Copeland as students, the unlikely quartet unites to take him down.

Set in modern-day Los Angeles, These Violent Delights is a literary exploration of the unyielding pressures and vulnerabilities that so many women and girls experience, and analyzes the ways in which our institutions and families fail to protect or defend us. A suspenseful and nuanced story told from multiple points of view, the novel examines themes of sexuality, trauma, revenge, and the American myth of liberty and justice for all.

My Thoughts: Journalist Jane March is planning a new story when her intern, Caryn Rodgers, approaches her with a very secretive assignment. She has written an essay detailing events in a private girls’ school years before, and has included supporting e-mails from the perpetrator.

Once they have cleared the way with their legal team, and verified the facts, they decide to publish the essay in the Sunday paper. What Jane and some of the other women notice immediately is how quickly the male staff want to discredit the events…wondering why the young girl (fifteen at the time) hadn’t gone to the police. These reactions pave the way for what they will face down the road.

Publication leads to more girls coming forward, though, and while this sounds like a good thing, it also leads to more pain for the victims. They are supported by some, but vilified by others. The long road ahead will be even more brutal for Sasha, one of the girls, whose own personal background had been abusive. Her fragility led to stunning and painful events.

A story that could have been ripped right out of today’s headlines, These Violent Delights gripped me and kept me glued to the pages. The multiple narrators offered the opportunity to feel the experiences of the characters, which made for compelling reading. Recommended for those who enjoy books based on flawed individuals making bad choices, and the consequences that literally change their lives. 5 stars. 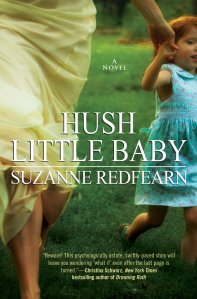 They looked like the perfect family. Gordon, a police officer, Jillian, an architect, with two beautiful children, Drew, 8, and Addie, 4: they all live in a gorgeous home in the upscale community of Laguna Beach. But behind closed doors, havoc reigns. For nine years, Jillian has suffered abuse, fear, and the threat of escalating violence at the hands of her husband Gordon.

But nobody would believe her even if she did tell. Which is why Jillian does the unthinkable one day. She grabs the kids and runs.

In the suspenseful page-turning Hush Little Baby, the reader is reeled into the kind of existence that only an abuse victim lives with everyday, and as the story unfolds, we come to realize that there will be only one kind of conclusion: one of the two, either Gordon or Jillian, will end up dead.

Themes of domestic violence and the kind of family dysfunction that allows it to flourish are at the core of this story that will appeal to anyone who has ever lived it, as well as those who have worked to help change things for victims.

There were times that I shook my head at the poor choices made by the characters, even Jillian, who kept staying long after she should have. But all of these behaviors are completely understandable when one considers the options available. 4.5 stars.