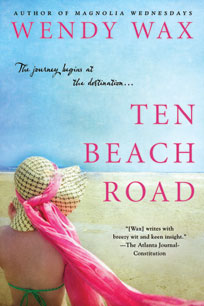 Three women from very different circumstances have one thing in common.  They have all suffered financial ruin at the hands of a financial manager, and they all now share ownership in a ramshackle beachfront property in Florida.

When they meet to assess their property, they come to a seemingly untenable decision.  They will restore the historic home back to its original beauty, and then sell it.  But they must achieve this in a record amount of time and by doing the work themselves, under the guidance of a local contractor.

The journey brings out all the strengths they weren’t sure they had and forges friendships that will bring more than they could have bargained for.  What happens during the course of this amazing journey will be totally unexpected, with some sad and some victorious moments.

Avery, Nicole, and Madeline will end up with something else they hadn’t expected.  They will discover untapped resources inside themselves that they will carry with them into the future.  But what disasters and obstacles will befall them before they’ve reached their goal?  And what will sustain them in the days, weeks, and months ahead?

Each character was someone I could relate to, even though none of them had experiences I’d enjoyed.  Avery, an architect who had been reduced to a “Vanna White-like” role on the HGTV show she co-hosted with her ex-husband, is frustrated and full of anger; Nicole has a very successful matchmaking business to high-end clients, but something is missing from her life; and Madeline has been a homemaker all of her life, but her current empty nest has her seeking something new to do with her life.

In many ways, they are each ripe for the picking when fate throws them a few curves.  Isn’t it true that what doesn’t kill you makes you stronger?  Each of them is forced to find out the truth of that on their new journey.  I loved that each of the women began to reach out to one another, despite the secrets they tried to hold tight within.  I felt emotionally drawn to them when obstacles popped up, as inevitably they would in such a situation.  None of the women has been trained to do an “extreme makeover” like the one they face.

The contractor, Andrew, is an old family friend to Avery, but the way he seemingly condescends to her, calling her “Vanna” repeatedly, raised my ire.  I could identify with the plight of being diminished by a man who is in a position of power.

I thoroughly enjoyed how Madeline came into her own as the leader and go-to person for organizational skills.

As I turned the pages of Ten Beach Road, I didn’t want the story to end.  Even though I wanted to see what would happen, that satisfaction would come at the price of losing these friendships.  For by this time, I felt as though these women were part of my own friendship circle.  This book earned five stars from me.

Check out the Q & A With Wendy Wax

“All of my class pictures from Sunshine Elementary School are displayed at the Gulf Beaches Historical Museum on Pass-a-Grille,” says Wendy Wax, speaking about her childhood in St. Pete Beach, Florida. “Fish Broil was the big event every fall and the best days were when we had recess or art class on the beach, but what I remember best is running loose with my friends and exploring every inch of the beach we called our own. Is it any surprise it’s still one of my favorite places in the world? Or that it ended up as the setting in one of my books? It was bound to happen someday.”

Someday came when Wendy began reading about how the lives of so many people, from so many different walks of life, changed dramatically as a result of Bernie Madoff’s Ponzi scheme. It wasn’t long before she was imagining a scenario in which three women face bankruptcy at the hands of an unscrupulous money manager. At the end of the day, these three strangers discover that all that’s left of their savings is shared ownership of a once-glorious beachfront mansion. They’re faced with a choice. They can cut their losses and sell for whatever amount of money they can get, or—in a bid for solvency—accept the backing of a local contractor in order to restore the historic property themselves, bit-by-backbreaking bit.

The basics of her plot and the themes Wendy imagined—women facing adversity, making choices, redefining themselves and discovering the strength of friendship—gave her a wide range of possible settings for TEN BEACH ROAD. When it came time to embrace ambiance, architectural styles, and local color, she chose a
place she knows well, her hometown of St. Pete Beach. It was right for so many reasons. Its tropical climate, dual
cultures of vacationers and residents, and even the current real estate market fit her story well, and presented
challenges her characters might not have faced elsewhere. Of course, it also gave Wendy an opportunity to indulge in researching the Mediterranean-Revival architectural style she so admires and the history of the area, as well as to share her pleasure in magnificent Gulf sunsets and some of her favorite spots in Historic Pass-a-Grille.

Among her fondest memories are visits to her local library. Wendy read voraciously as a child, becoming fast friends with Nancy Drew and Anne of Green Gables. Her love affairs with language and storytelling paid off beginning with her first shift at the campus radio station while studying journalism at the University of Georgia.

Wendy returned home, graduated from the University of South Florida and then worked for the Tampa PBS
affiliate, WEDU-TV, behind and in front of the camera. Her resume includes on air work, voiceovers and production work on a variety of commercial projects and several feature films. She was best-known in the Tampa Bay area as the host of Desperate & Dateless, a radio matchmaking program that aired on WDAE radio, and nationally as host of The Home Front, a magazine format show that aired on PBS affiliates across the country.

The mother of a toddler and an infant when she decided to change careers, Wendy admits it may not have been the best timing in terms of productivity. “I’m still not certain why I felt so compelled to write my first novel at that particular time,” she says, “but that first book took forever.” Since then she’s written six others, including
Magnolia Wednesdays, the Romance Writers of America RITA Award finalist; The Accidental Bestseller and Single in Suburbia. Her novel 7 Days and 7 Nights was honored with the Virginia Romance Writers Holt Medallion Award. Her work has been sold to publishers in ten countries and to the Rhapsody Book Club, and her novel, Hostile Makeover, was excerpted in Cosmopolitan magazine.

Wendy lives in Atlanta, which she has called home for 14 years. A former broadcaster, she spends much of her non-writing time speaking to writer’s groups and book clubs, enjoying time with her husband and sons, and visiting her family in St. Pete. She continues to devour books.

8 thoughts on “A JOURNEY TOWARD REDISCOVERY — A REVIEW”